There are so many ways to practice counting with preschoolers. Dramatic play is a big deal around our house so I thought a pretend store would be a big hit. This activity didn’t disappoint. 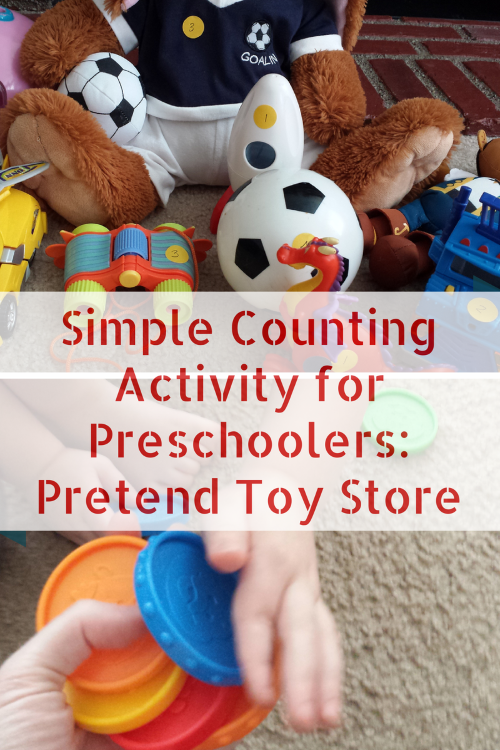 We have one of the pink Laugh and Learn Piggy Banks that so many babies and toddlers have. On this particular day, both of the kids were very interested in it. Alyssa is finally learning how to put the coins in the top of the bank which is great fine motor practice. Evan was enjoying pretending the coins were real money and he was buying things around the house. This gave me an idea.

I thought he would really love it if I used some dot stickers to price some of his toys. Not only would this be a fun dramatic play opportunity, but we could also use this to practice number identification and counting objects.

Toys from around the house

Dot stickers (color coding stickers) *These may leave a residue on the toys when you go to remove them. It wasn’t too bad, but if you are worried about that kind of thing, you may want to use older toys.

Pretend money – this could be toy coins like the ones we used, play money, counters of some sort or even real money. *Just be careful with small objects that could be a choking risk if you are doing this activity with a younger child or have a younger child in the home.

I found that pricing the toys with a number 1-3 worked out the best with the amount of coins we had and Evan’s current abilities. I started out with numbers 1-7, but because we only had 10 coins he often could only buy 1 or 2 toys from the store. He didn’t like that. He also had more difficulty counting out each coin when he had to count up to 6 or 7. I wanted this to be fun and not stressful, so I modified the activity. There are so many ways you could adapt this activity. You could use bigger numbers, work on addition or subtraction and even use this to teach counting real money.

I wrote the numbers on the dot stickers and then placed them on the toys. Evan decided to keep his coins in a pencil pouch he has. I pretended to be the cashier at the store and he was the customer. This is even more fun if you have a shopping cart to use as well. Evan would come to my store and tell me the first toy he wanted to buy. Then I would ask him to tell me the number on the item. After he told me, I would ask him to count out that many coins to pay me. So if the item was labeled with a 3, he would count out 3 coins and hand them to me. This would continue until he ran out of coins and couldn’t buy anything else. Sometimes I would ask him how many coins he had left after paying for 1 or 2 items. Other times he wanted to buy an item he didn’t have enough coins left to purchase so he had to pick a less expensive item. Often, I had to remind him that he only had 2 coins left so he would have to pick an item that cost 1 or 2 coins. 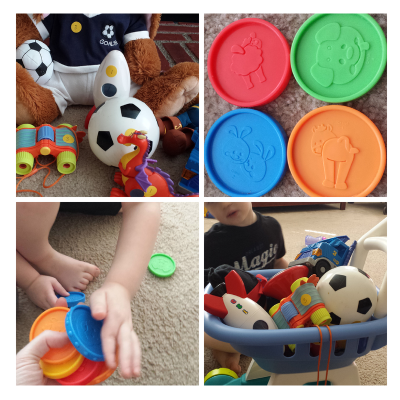 We did this over and over again. He would spend all his money, take his shopping cart full of toys for a drive around the house and then come back to return the items and shop again. This activity was packed full of learning opportunities and Evan had a blast playing at our pretend toy store!