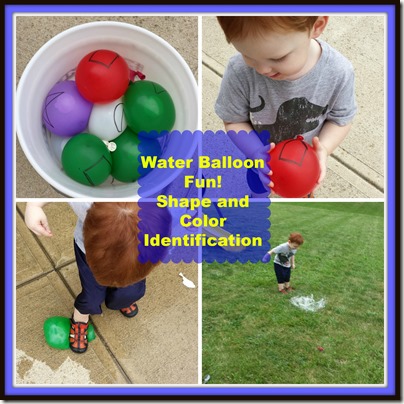 Evan has been asking to play water balloons for the last few weeks. He and Daddy had a TON of fun throwing and stomping water balloons on Father’s Day. I finally remembered to pick up a new pack of balloons, so today we went outside and put them to use! This time I decided to draw shapes on the balloons with permanent marker and ask him to identify the shape before he was able to pop it. The shapes I drew include: squares, rectangles, triangles, circles, ovals, pentagons, stars and crescents. After playing with his new pattern block puzzles, he has started learning to identify hexagons and trapezoids, so I added those to some of the balloons as well. The pack of balloons I picked up at Dollar Tree didn’t have much variety of color, but I did ask him what color each balloon was too. Evan learns best when he gets to move and do gross motor activity at the same time. So this kind of learning is where he thrives most. This was so simple and exactly the type of activity we would normally do anyway. We just added a little learning to the mix too. 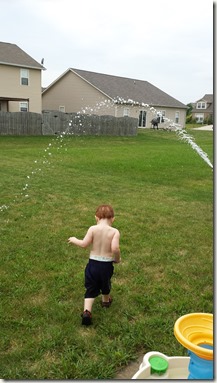 Then we had some fun in the hose!

This post is linked up with other blogs at The Weekly Kids Co-Op.