Evan loves playing outside in his water table, but lately it’s been a bit boring. We just play with different pouring devices, balls, or boats. I wanted to plan an activity that would be fun and also educational. Something that would get us out of the water table rut we’ve been in. So I decided to do a sink or float lesson. Evan is familiar with the concept, but could use more practice, for sure. 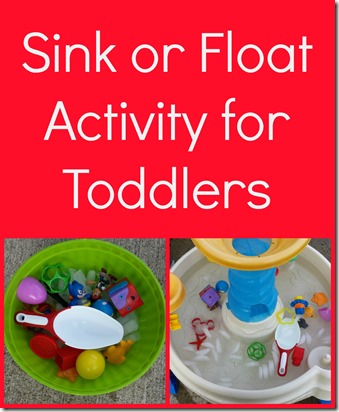 First, I went around the house collecting toys and objects that we could test out. I made sure to pick things I knew would sink and then things I knew would float. I decided to make it fun and different by adding a bunch of ice to the water table as well. I also brought out the ice scoop in hopes it would encourage him to practice scooping up objects and then dumping them out. Evan needs to work on using utensils. He still has a hard time using them while eating. He just REALLY loves food and has no patience for trying to scoop objects up on a spoon or fork. He would rather quickly grab a handful and shove it in his mouth. 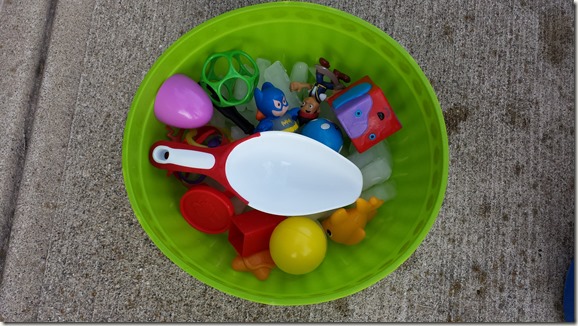 We started by picking objects one by one and guessing if we thought it would sink or float. For Evan, these were purely guesses without much thought behind them. He simply yelled out a guess and quickly threw the object in the water. I still continued to ask because I want to foster critical thinking skills in him at a young age. I want him to begin learning to ask questions, make predictions and think through outcomes. After a while, he just dumped all of the remaining toys in the water table. At this point, we just played with the toys while discussing if certain ones were sinking or floating. After a few more minutes, he moved on to scooping things out of the water and back into the bowl we brought the items out in. He struggled some, but was happy to keep practicing for a bit. 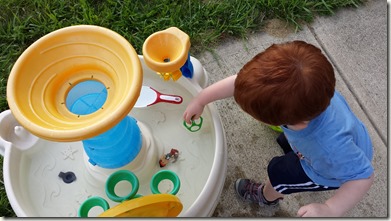 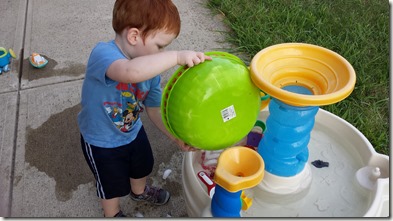 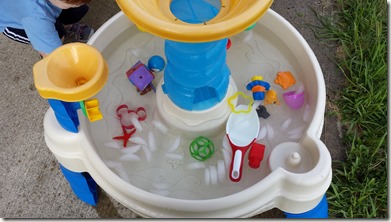 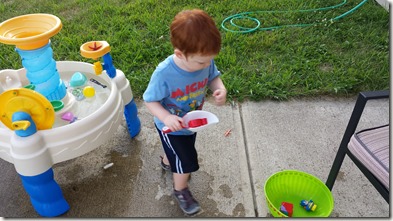 As you can tell, this is another simple activity with very little planning involved. If you don’t have a water table, you can do this in the bath tub, a bucket or even a big bowl. You don’t have to spend a lot of time drilling it in either. Just discuss while playing and when it’s not fun anymore, move on.