I try to include vegetables at every meal for Evan. Breakfast is hard though. Sometimes I will scramble up some eggs and add green peppers or salsa to the mix, but other than that I rarely find a way to include them. I’ve seen other blogs that had recipes for pancakes with fresh veggies inside. These are great, but I don’t always have the time to wash and shred fresh veggies before I whip up a batch of pancakes. That’s when I got the idea to buy organic pouches of pureed baby food and add them to the pancake mix! I can pick combos that include veggies and fruits as a way to make the flavor more appealing as well.

For this batch of veggie pancakes, I used a pouch that included apples, blueberries and spinach. I used a premade pancake mix for these, but there are some great recipes for pancake mix from scratch that I use as well. This should work with any mix you decide to use, so pick your favorite and go to town! I whipped up a batch of pancake batter using less liquid than the recipe calls for since the pureed baby food will thin the batter out as well. I recommend using just enough liquid to have a thick batter and then add the baby food. I used the whole pouch, but you can use as much as you want depending on flavor or the size of your batch. Then, if the pancakes are still too thick, you can add more liquid to get them to your desired consistency. Finally, cook as you normally do. Evan gobbled them up and was none the wiser about the veggies! 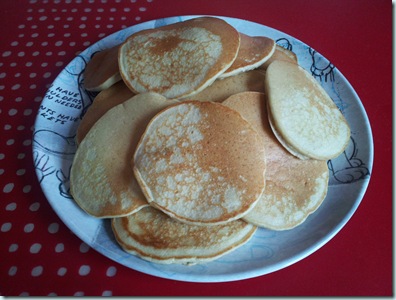 I made a fairly large batch so that I could freeze them for later. I cooled the pancakes on the counter and put 4 pancakes in stacks of 2 in a sandwich bag. Then I added all the sandwich bags to a gallon size freezer bag and put it in the freezer. In the morning, I pull out a sandwich bag and remove a stack of pancakes. Put them on a plate and microwave for 1 minute on high. There you have it! A simple way to add veggies to your child’s breakfast and the ability to make ahead for future meals!

Added tip: I use a ketchup bottle I got from the store for $1 to make my pancakes. I add the batter to the bottle and squeeze it into the pan. Here is a pic of my bottle. I cut the cap off the bottle and had to cut the tip of the bottle down so more batter could come out at once. It is so much easier and much less messy! 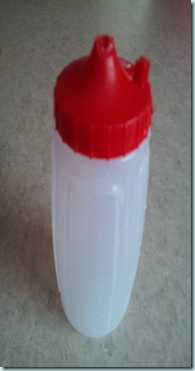