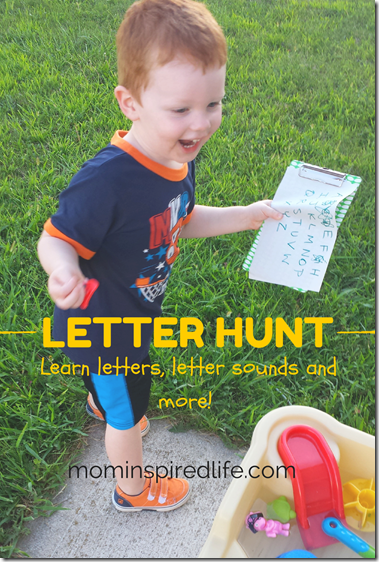 We are enjoying the fantastic cooler weather we have this summer and doing lots of outdoor activities. This one can be done indoors or outdoors, so it’s great for any season. It’s another simple, low prep activity that you can modify in a variety of ways.

Evan really enjoys going on treasure hunts of any kind. I often hide small toys or leftover Easter eggs so that he can go around finding them. Sometimes we switch and he hides them from me and I have to go searching. So when I thought of this idea, I knew he would like it!

You will need letters, paper and something to write with. I used magnetic letters I got at Dollar Tree, but puzzle pieces or even small pieces of paper with a letter written on each will work.

The first thing I did was hide all the letters around the backyard.  Then I wrote all the letters of the alphabet on a piece of paper. I gave the paper and a marker to Evan and told him he was going on a letter hunt. That alone was enough to get him very excited. We went outside and he took off on his hunt. When he found a letter I would ask him what letter it was. If he didn’t know, I would tell him the letter name. Then I would say the sound the letter makes and give him an example of a word that starts with that letter. I would then ask him if he could find the letter on his list. He would search for the match and then cross it off the list. This continued until all the letters were found. 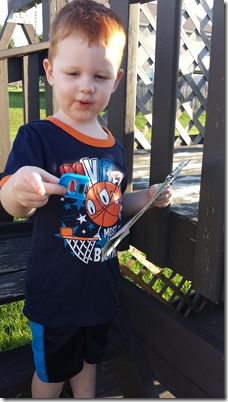 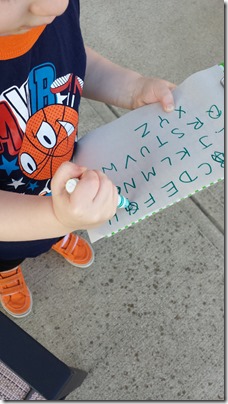 You can modify this to fit your child’s skill level. For many of the letters, I had to tell him the letter name and help him find it on the list. As he becomes more proficient in this area, I will ask him to tell me the sound it makes and/or a word that begins with that letter. After that I will have him find uppercase letters and match to lowercase letters written on the paper. You can also do this with less letters at a time. You can even apply this same activity to numbers, shapes or colors.

Check out TONS of other fun learning activities at my Toddler and Preschool Learning Activities Pinterest board!