Dinosaurs are very popular with preschoolers and this dinosaur fossil excavation activity is an exciting way to teach them about dinosaur fossils and the paleontologists who excavate them. 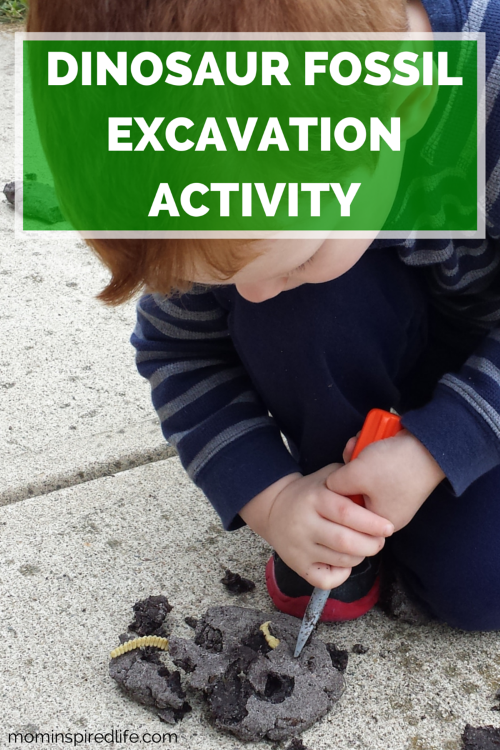 I have been anxiously awaiting this week because Evan LOVES dinosaurs. If I integrate dinosaurs with any subject, Evan is so much more enthusiastic about it. I knew he would thoroughly enjoy the activities I had planned and I could hardly wait to do them! This activity puts a spin a popular recipe that many people use to make “dinosaur eggs.” Instead of hiding a tiny toy dino inside of an egg, I decided to use the same recipe to make big chunks of “rock” and put toy dinosaur skeletons inside. This way Evan could pretend he was really excavating a dinosaur skeleton from the earth’s crust.

This activity teaches young children about dinosaurs, and more specifically, their bones and the fossils that have been found. These ideas come to life when your child has the chance to practice them in the playful, hands-on way this activity provides.

Water – slowly add it until you reach a clay-like consistency

Toy tools or other gadgets to dig out the dinosaur.

Before starting the excavation, we read two books on the topic. The first is Dinosaur Bones by Bob Barner and the second is Bones, Bones, Dinosaur Bones by Byron Barton. They are perfect for preschoolers because of their simplicity, rhythm and illustrations.  However, both books are great for all ages. They were an excellent introduction to what fossils are and what paleontologists do. Evan and I highly recommend them!

1. Mix the dirt, flour, sand and salt in a large bowl or bucket.

2. Add the water until you reach a clay-like consistency.

3. Put the mud all around the dinosaur skeletons until it looks like big chunks of rock. I left one or two tiny pieces of the skeleton peeking out so I could play up the idea that I found this large rock and I think there may be bones of some kind inside.

4. Leave the “rocks” out to dry for 3 or 4 days. (Ok, I didn’t have this much time, so I ended up baking them at 175 for 1.5 hours or so one night and then another hour the next morning. I was worried about the plastic skeletons melting in the oven so I checked them frequently. The little parts of the skeleton that were sticking out never appeared to get soft and the skeletons weren’t warped in any way. However, do this at your own risk.) 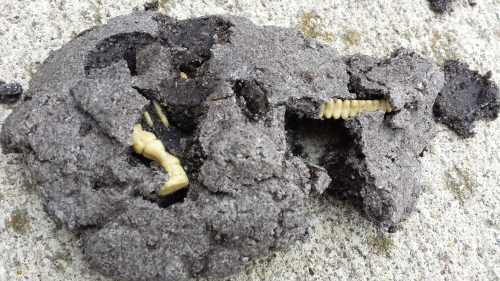 This is after it was broken up a bit.

Activity Instructions:
I gave Evan the “rocks” and told him that there appeared to be something inside and I needed him to dig it out. He was more than happy to help me out. I gave him a toy hammer, toy screw driver, pumpkin scraper tool and a paint brush. He went to town chiseling and digging and scraping his way through the rocks until he had completely unearthed the dinosaur skeletons. He even used the paint brush to dust the dirt off of them. He really thought he was a paleontologist. It really helped solidify his understanding of fossils and gave him a better idea of what paleontologists do. He has already asked to do it again and keeps talking about how fun it was. 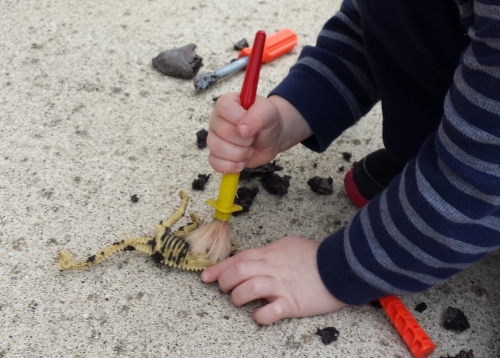