Kids love to pretend they are community helpers and one of their favorites is firefighters. Rescue the Alphabet Game is a fun way to combine pretend firefighter play and learning. 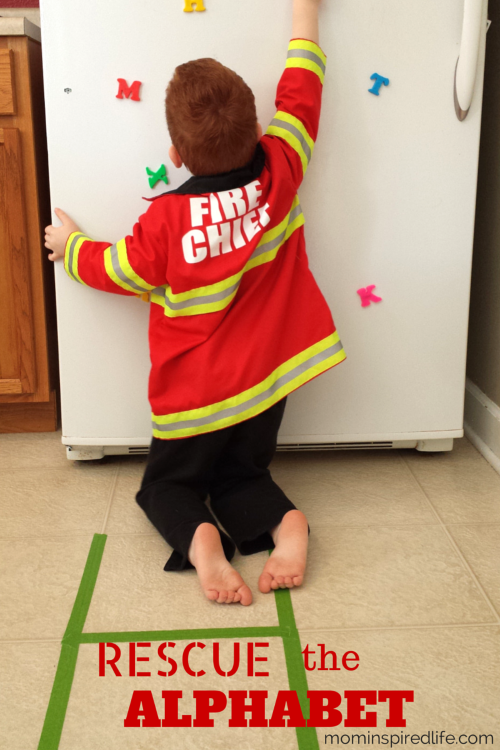 This week the PLAYful Preschool Team is bringing you a multitude of activities based on the community helpers theme. There are so many good ideas listed at the bottom of this post! Also, don’t forget to follow #playfulpreschool across all social media platforms.

Evan is very interested in firefighters and fire rescue right now, so I decided to build upon that and came up with this alphabet game. I came across a post about making a tape ladder on the floor and thought it was so neat. I decided it would be a great concept to add to this game. While playing we practiced letter recognition and letter sounds and we worked on gross motor skills. It’s actually great exercise. Evan was sweating by the end of the game. So if you need to burn off some excess energy or can’t get outside due to bad weather, this is the game for you!

by Audrey Wood and Bruce Wood. It is the PERFECT go along book for this activity and added to the excitement of the game for Evan. He really got into saving the letters after reading the book. It would be a great book to use with preschool fire safety or community helpers theme lesson plans as well.

Activity Prep:
1. Make a ladder with painters tape on the floor leading up to the refrigerator or whatever magnetic surface you are using.
2. Put all the letters you would like to practice with on the refrigerator.

Activity Instructions:
First, Evan had to get his firefighter gear on. Then I explained that the letters on the refrigerator were in need of rescuing and he would have to climb the ladder (crawl over it on the floor) to get to them and bring them back. He caught on right away and was ready to get started. To begin, he stood at the bottom of the ladder and I would call out a letter or make a letter sound and he would hurry to climb the ladder, find the letter and run it back to me. We did the same thing over and over again for every letter.

I made sure to say fun things like “Hurry, the “J” needs to be rescued!” and “Wow, you are so good at rescuing letters!” That kind of commentary, really encourages and motivates him. He totally thought he was a fireman and he really felt like a hero when he saved those letters!


Join us tonight at 9:00 EST for a Live Google Hangout. We will be sharing  fun crafts, learning activities, and movement games for the community helper theme.The event will be recorded and available for veiwing afterwards.