This castle catapult math game is so much fun for preschoolers! Kids will practice counting and adding while launching objects at a castle. It’s easy to make too. 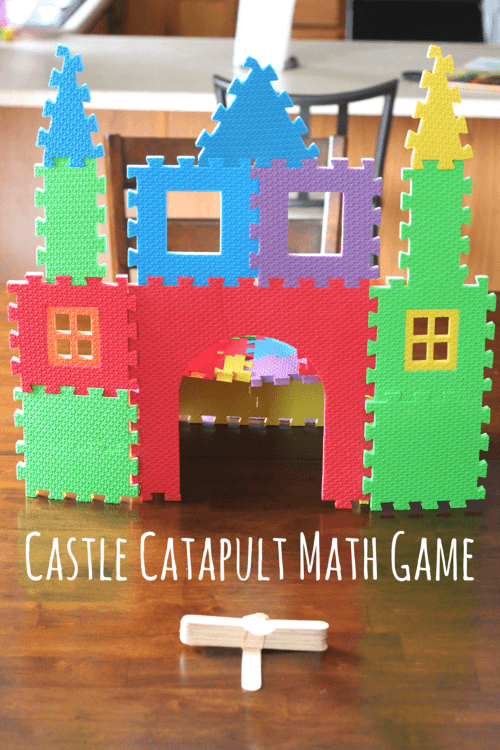 This week the PLAYful Preschool theme is castles. The team is excited to share all of our playful castle lesson plans with you!

This activity has so many educational benefits. Even without any verbal instruction from you, kids will explore a variety of concepts across multiple subject areas.

While playing this castle math game, children will:

I never mentioned the words lever or fulcrum while doing this activity, but Evan was exposed to the concept and this activity will serve as a frame of reference when he does learn about these terms. He explored force a lot while doing this. He experimented with pulling the spoon with different degrees of force. He also experimented with distance and moved the catapult around to see how it would affect his ability to launch projectiles into various locations on the castle.

We used our brand new foam tiles. We love them and they were extremely economical too. I included the link for your reference, but they were only $12.99 at Toys “R” Us. You can use blocks or Lego bricks as well. You could even draw a castle on poster board.

How to Set Up the Catapult Math Game

1. Make a catapult with craft sticks and rubber bands. I promise that it is very easy to do. It only took me about five minutes. Here is a video that shows you how.

Our catapult is slightly different from the one in video, but we plan to try that one soon! You can still add a spoon to it by using an additional rubber band to attach the spoon. I recommend doing that for preschoolers because it makes it easier to launch the pom poms.

2. Build a castle or have your kids build one.

To begin, I gave Evan the chance to play with the catapult first and practice various techniques for launching the poms poms. 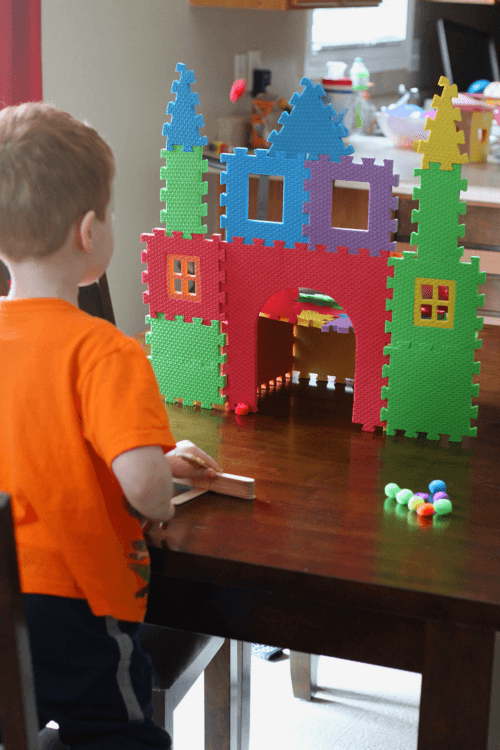 After he had time to play with the catapult, I told him we were going to play a game. I gave him 5 green pom poms and gave myself the same number of purple pom poms. 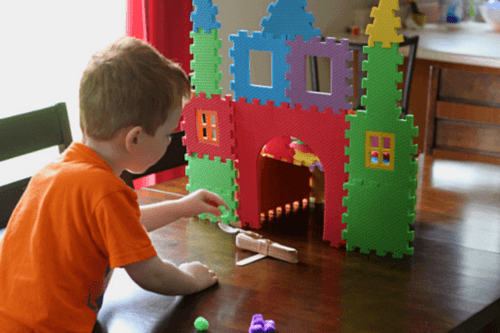 He launched all 5 pom poms and as he did, we kept track of how many points he had with tally marks. Most times he only got 1 point, but he still had a lot of fun trying to get them in the door and windows.

Then I launched my pom poms and we kept track of how many points I got. This continued back and forth until we were ready to move on.

Evan had a blast with this activity. He enjoyed the entire process and is still playing with the catapult daily!