I am so happy about these playroom bins! I currently have two IKEA EXPEDIT shelving units in our playroom. Originally, I purchased the DRÖNA bins from IKEA as well. They are a perfect fit and hold a lot, but they are made of cardboard and fabric. 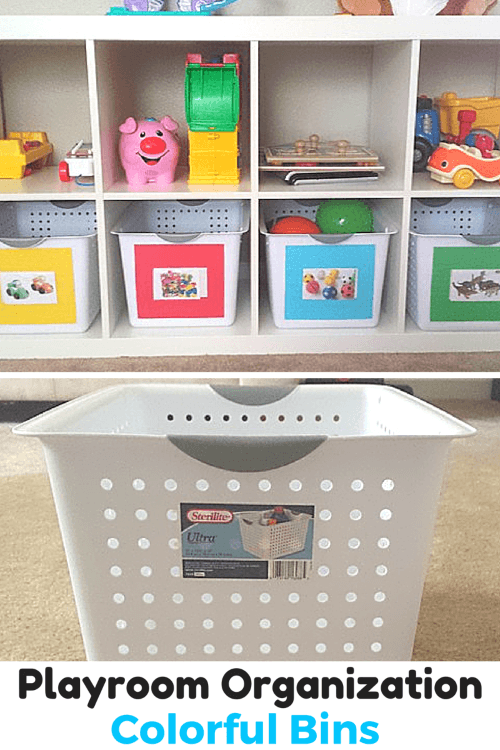 After 6 months of using them, I realized we needed a more durable solution. Evan liked to climb in and on them. They were starting to show wear and, before the were totally destroyed, I decided to replace them in the playroom and re-purpose them somewhere else.

I found these bins on Amazon (affiliate) for about $22 for 6 bins! What a deal! 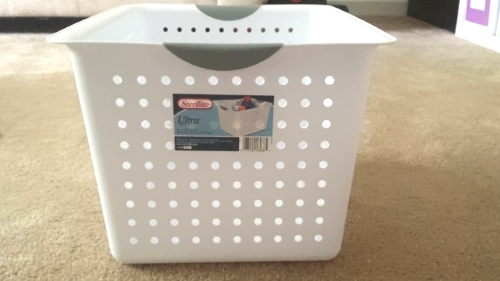 They aren’t as high as the other bins, but they still fit a ton. The only issue I had with them is that they were white. I wanted more color for the playroom and the shelving unit is already white as well.

So I came up with the idea of placing colored paper on the fronts of them and then placing a label on that. First I cut the paper to size and then glued a white index card to the center. Then I laminated the whole thing for durability.

I used clear packing tape to adhere the whole thing to the bin. One and half years and an additional child later, they are still attached so I would say it worked.

I used Google Images to find pictures of the toys because I wanted to get it done and didn’t want to mess with taking my own pics. I printed them out at 3×5 size and slid them in the pockets. Evan loves the pictures and will often just sit and point to the different bins and say what is in them. 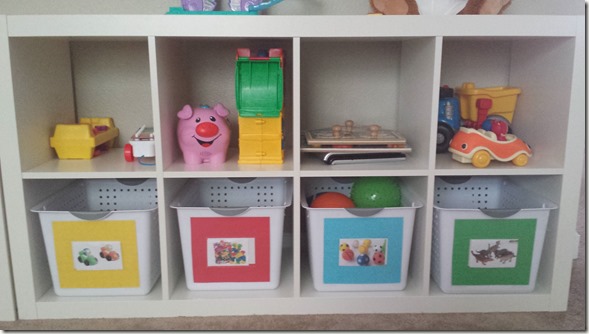 Here are some additional posts you may enjoy!