Get your kids moving and learning with this exciting winter alphabet game! Snowball sweep is an excellent way to learn letter sounds while developing gross motor skills! 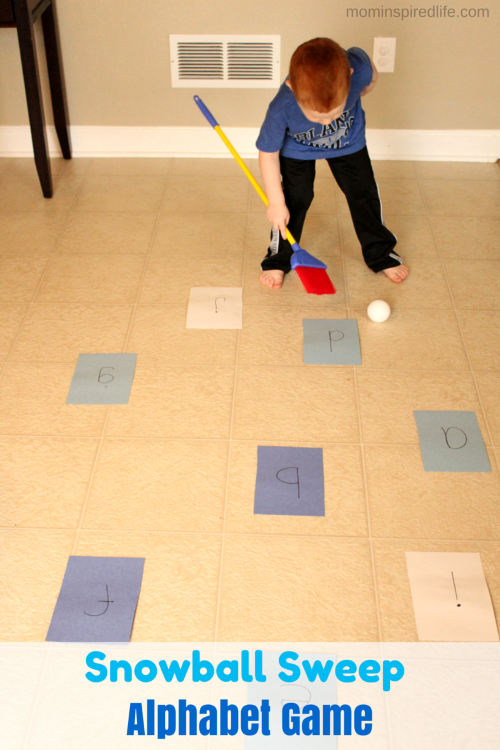 Do your kids love to use the broom as much as my child does? He loves it so much that we bought him his own kid-size broom. When I told him he would get to hit a ball across the room with the broom, he was beyond thrilled!

This game helps children practice letter identification and letter sounds in a playful way so that they are motivated to learn and enjoy doing so. Evan loves to play sports, so a game like this is a perfect way to encourage him to learn the letter sounds.

1. Cut each sheet of construction paper in half and wrote one letter on each piece.

2. Use painter’s tape to adhere the paper to the floor.

Have your child stand with the broom in hand and ball on the floor in front of them. Call out a letter sound and have them hit the ball with the broom in an effort to make the ball roll over the corresponding letter. For instance, I called out the sound “fffff” and then Evan had to decide which letter made that sound, locate it on the floor and then sweep the ball towards the letter “f” in such a way that the ball will roll over the letter. If he missed he went back and tried again until he was able to roll the ball over the letter.

This was not only great letter sounds practice, but an excellent way to work on coordination and gross motor skills. Evan really enjoyed the challenge of aiming the ball and trying to get it to roll over the letters on the floor. He didn’t even realize he was learning so much because he was so engrossed in the game.