This letter learning game, Alphabet Battle, is similar to Battleship. Kids will have a ton of fun while learning letters and developing critical thinking skills! 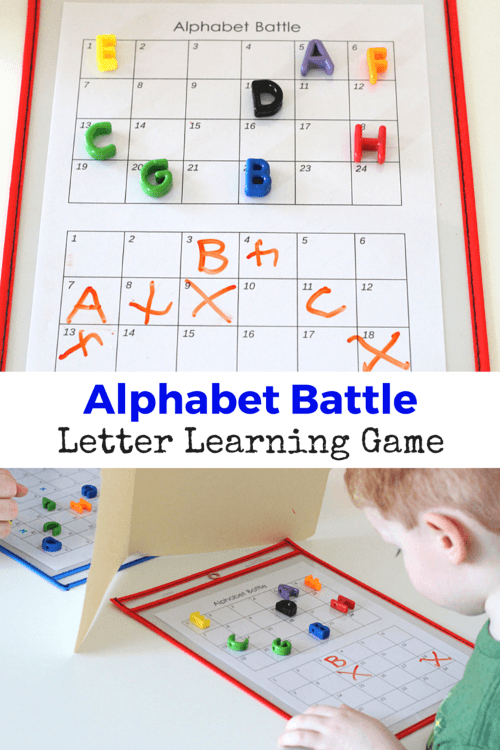 We have really been enjoying lots of alphabet games in our house. Evan loves playing them and they have been super effective at teaching him to identify letters and letter sounds.

I came across this awesome sight word battle game the other day and thought it would be really fun to make an alphabet version for Evan.

That is all you need, but if you would like to reuse the sheets like I did, you will need:

We used letter beads when placing our letters on the game board because Evan can’t write them yet. I helped him play the game against his dad, so I could have written the letters for him or helped him write them, but this just made it easier for him to be more independent.

You could also make your own letter tiles by writing letters in 1 inch by 1 inch pieces of paper.

How to Play Alphabet Battle and Learn Letters

1. Put a folder or something else between the two players to block them from viewing the other’s board.

2. Each player will place letters randomly on boxes in the top portion of the game board.

3. The bottom portion of the game board is to keep track of your which letters you have found and which numbered boxes were misses. So when you ask your opponent if they have a letter in a certain box, you will record their answer with an “X” if nothing is there or with letter they have hidden there. 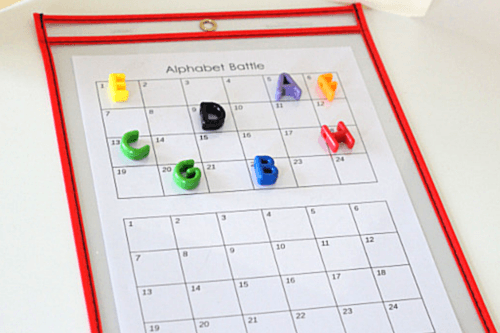 2. Player 1 will record their findings on the bottom portion of the game board with an “X” for a miss or with the letter they found.

3. Player 2 will now do the same thing Player 1 did above.

4. This continues back and forth until one of the players has found all of the letters on their opponent’s game board. 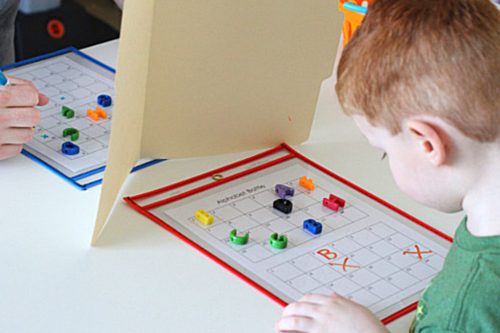 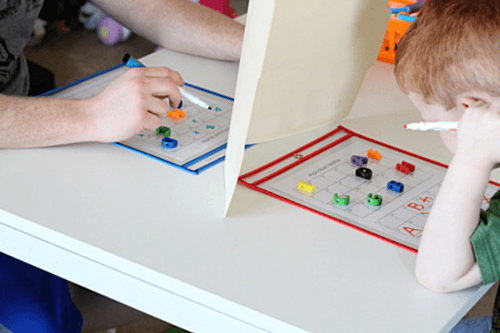 Evan needed someone to help him play the game. Older kids, will be able to do this alone. Another option that would give a younger child more independence, is to give them a second set of letter beads or letter tiles and they can use those on the bottom section of the game board to record the letters they found.

I don’t know why I didn’t think of this while we were playing. I ended up writing the letters for him and he wrote “X” on all of the boxes that were misses.

Also, younger kids may not know how to say “seventeen” or “twenty-one.” It is just fine for them to say “one and seven” or “two and one.” That is what Evan did.

Most kids, will need a bit of direction the first time they play the game. They will need to be reminded what to do next or how to play. After that, older preschoolers and kindergarten students may be able to do this independently. Younger kids, will need an adult to play with them.

For now, Evan likes playing against his dad while I help him. We all enjoyed playing this game!

Jack and the Beanstalk Alphabet Game